Lawrence Leung is an actor, writer and award-winning stand up comedian. He created the ABC1 comedies Lawrence Leung’s Unbelievable and the AFI Award-nominated Choose Your Own Adventure. Last year he co-wrote and played the lead in Matchbox/ABC2’s comedy series Maximum Choppage. The feature film Sucker is adapted from his award-winning one-man stage show of the same name and won Best Narrative Feature at the St Lawrence International Film Festival (USA). He has been nominated for AWGIES for both Sucker (with director Ben Chessell) and Maximum Choppage. For the stage, Lawrence has written and performed one-man shows that have toured Edinburgh, London’s Soho Theatre and the Sydney Opera House. He has recently played the Melbourne, Perth and Sydney Comedy Festivals with his new show Very Strange Things. He also plays an awkward doctor on Offspring. 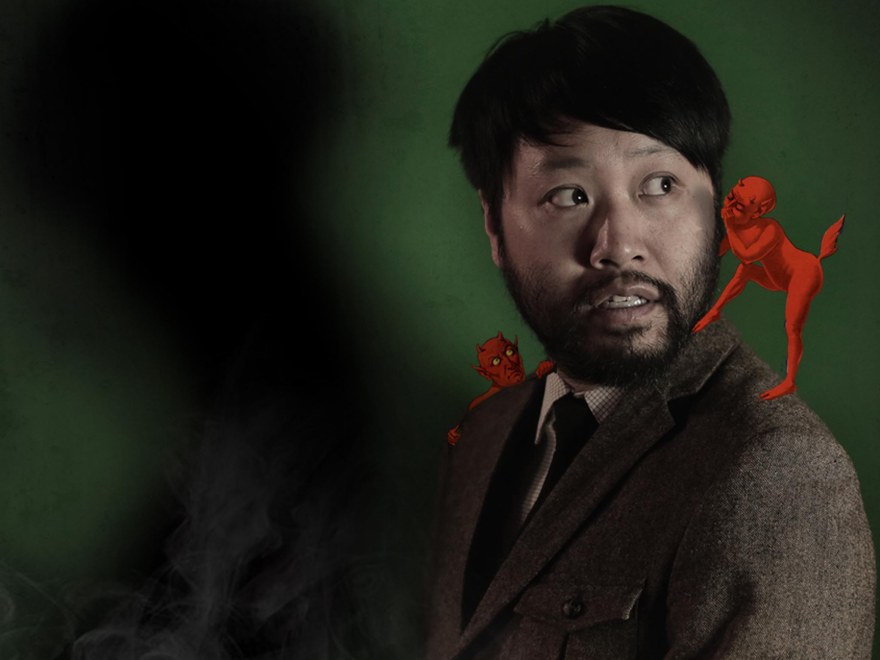 Lawrence Leung talks to The Street ahead of the Very Strange Things Season.

I guess the answer is that I love it. I love the relationship with an audience that a live comedy show has. It’s interactive and in the moment. Different to drama, or say, being in front of the TV or at a funeral. A funeral is a bad example. I’ll start again. In a comedy show, audiences are invited to see the ordinary world at an odd angle that they had never seen it from before. I think it’s my job to ask people to stand at that weird angle, look, point and laugh. Usually it’s at me. Sometimes I’m holding a mirror back at them, suckers.

YOU CALL YOURSELF A PURVEYOR OF CHOICE STORIES AND JOKES. TELL US MORE.

The bits that people laugh at I call “jokes”. The bits that they don’t laugh at I call “stories”. My website banner says “purveyor of choice stories and jokes” because I saw a sign at a butcher’s shop that advertised itself as a “purveyor of choice cuts”. I’m fond of butchers with good vocabulary. In many ways, I’m a butcher chopping away at my life stories and nerdy obsessions and displaying these tasty treats for hungry audiences and salivating canines at the window. Vegetarian stretched metaphors are also available at my shows.

WHERE DO YOUR STORIES COME FROM?

They usually come from whatever I’m obsessed with at the time. I’ve done comedy festival shows featuring detectives, jet-pack inventors, love letters, breakdancing and even the Rubik’s Cube. Nerd pride! My latest show here at The Street Theatre “VERY STRANGE THINGS” is about my passion for mysteries, psychology and trying to explain the paranormal. I’ve spent a deal of time travelling around the world investigating psychics and haunted castles, meeting believers and sceptics, scientists and psychics. So I’ve a lot of material to draw on in creating this weird show. I had an audience member at the Melbourne Comedy Festival tell me she felt it was like “being in a real-life X-Files episode”. A wonderful quote that would look great on a poster or a butcher’s sign.

HOW DO YOU TEST YOUR MATERIAL?

I usually break up the show into smaller chunks and test them in pubs and clubs around town leading up to the Comedy Festival. It’s also helpful to put on ‘trial shows’ in front of small crowds, or if I’m feeling particularly masochistic, I’ll do a script reading in my loungeroom for my brutally honest comedian friends.

HOW DO YOU KNOW WHEN THE AUDIENCE IS NOT WITH YOU?

I think if they start texting on their phones, looking for Pokemons or doing a tax return, you’ve probably lost them.

WHAT DO YOU DO WHEN IT’S NOT WORKING?

It’s not a problem as much since telling people to turn their phones off before the show and leave the Tax Pack at home.

VERY STRANGE THINGS IS ABOUT EXPERIMENTS, MIND GAMES AND IMPOSSIBLE COINCIDENCES. HOW HAS IT DEVELOPED SINCE YOU FIRST PRESENTED IT AT THE MELBOURNE COMEDY FESTIVAL?

Originally I envisioned the show almost like those vaudevillian Evening of Wonders or a Victorian Cabinet of Curiosities – strange entertainments of which don’t exist anymore – but my modern stand up comedy sensibilities took over. So it’s developed into this funny, sometimes spooky interactive comedy show about the mysterious. I guarantee it’s unlike any comedy show you’ve been to before. There’s psychological illusions and mind games where audience members seem to accurately “read thoughts” or guess each other’s passwords. I learnt over the season I did in Melbourne that every show is completely unpredictable because each audience is different – which keeps it fresh on fun for me.

WHAT DOES IT MEAN TO BE A SCEPTIC?

A sceptic shouldn’t be confused with a cynic. For me, it’s someone who examines and investigates extraordinary claims with evidence-based critical thinking. Having a curious and scientific mind-set has made me really appreciate mysteries more, rather than less. I love the unknown, but we have to be careful. Like old saying says: “Be open-minded but not so open-minded that your brain falls out.” Having said that, “Very Strange Things” was very much designed for both believers and sceptics alike, with plenty of brain-busting ‘moments’ to make both sides doubt their positions over the 70mins.

ARE YOU SUPERSTITIOUS? IS THERE A PROCESS THAT YOU ALWAYS LIKE TO GO THROUGH BEFORE STEPPING OUT ON STAGE?

I’m not a very superstitious person, but I do like to pace around the block a few times before arriving at the theatre. It’s certainly a ritual, but I’m sure it’s one to calm nerves and build energy and focus, rather than anything supernatural. Although, sometimes when I rehearse/mutter my lines to myself as I pace around, I do look like I’m channelling spirits.

I think we are in a new Golden Age of TV. Screenwriters at the moment have really set the bar high for storytelling and boundary-pushing in all genres. It’s great.

Coincidentally, I just binged a series entitled STRANGER THINGS on Netflix. It’s a supernatural-themed story with a strong 80s Stephen King/Steven Spielberg vibe. Basically, it’s awesome and right up my alley.  In fact, I would go so far as to say the TV show STRANGER THINGS and my live show VERY STRANGE THINGS make great companions for a great week of entertainment-watching this August.