Co -founder of The People Speak, Mikey Weinkove is an artist, raconteur, inventor, and chat show host. He is the originator of “Talkaoke” and has toured the world hosting it in a huge variety of contexts. He has developed a number of different formats for non-directive discussion and exchange that are central to The People Speak’s ethos. 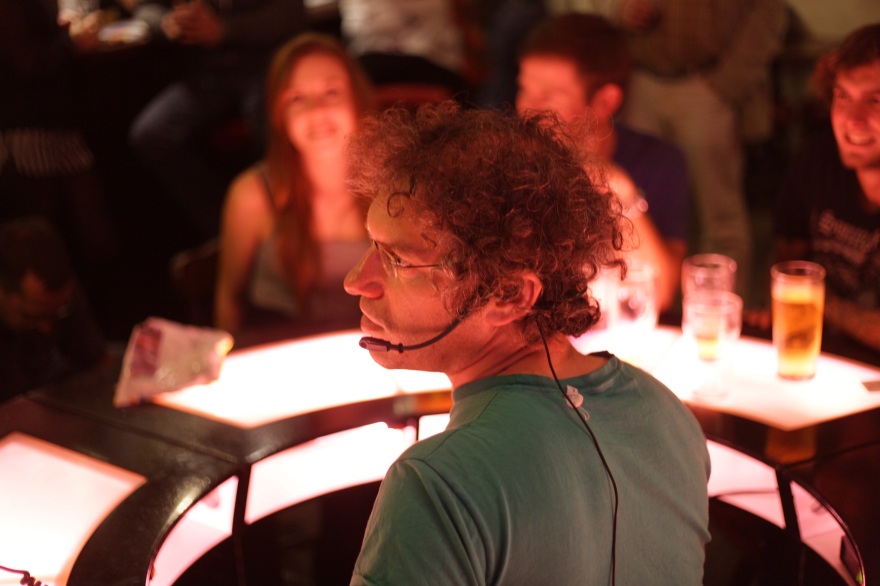 The Street talked to Mikey before his residency at The Street Theatre beginning at the end of August.

WHAT IS THE PEOPLE SPEAK?

The People Speak is a group of artists who use their skills to get participants into a creative flow.

HOW DOES THE PEOPLE SPEAK WORK?

We do gigs. We get paid – sometimes. It is an event based art practice. At the gigs the most interested people often end up joining our group. Before they know it some of them are working with us.

TALK US THROUGH TALKAOKE AND WHEN YOU FIRST PRESENTED IT IN A THEATRE CONTEXT.

Talkaoke began in a live art context. That’s a bit different to a theatre context. It usually involves performers pretending to be deranged and interacting with the audience in an abnormal manner.  But the theatre is an even worse place to do Talkaoke because it’s highly dramatic and therefore a very demanding place to perform. We discovered this when we did our first residency at the National Theatre. The context was a show about the difficulty of combatting climate change. People had a lot of thoughts before and after the show but talking in the theatre made them self-conscious. Getting outside on to the South Bank for our second residency at the theatre made all the difference. It turns out being just outside of a theatre is an excellent place to perform Talkaoke. These were some of the most successful sessions ever.

AS THE STREET’S ARTIST IN RESIDENCE AS PART OF SEGUE: WHERE EUROPE MEETS AUSTRALIA IN CANBERRA, YOU WILL BE SHARING A NUMBER OF THE PEOPLE SPEAK’S ART, CULTURAL AND DEMOCRATIC PROCESSES FROM THE SLICE IS RIGHT TO WHO WANTS TO BE … WHAT CAN WE EXPECT?

Expect the unexpected. Everything we do is about creating a safe structured space open to the imagination. We let the audience decide where to take it. You’ll see a reflection of the collective imagination of a certain part of Canberra.  For sure you will have fun. You will be thinking and learning, discovering insights- and getting pizza.

THE PEOPLE SPEAK HAVE BECOME EXPERTS IN HELPING GROUPS MAKE DECISIONS? TALK US THROUGH YOUR VALUES.

Whatever you say, I agree with you. That’s the starting point. The creative demand begins when you have groups that disagree with each other. You have to help them see what they have in common and why they disagree. We have ways and means to do this. One is the instability of not setting the agenda beforehand, so people don’t dig in to a defensive position. Another device is humour.

HOW DO YOU INVESTIGATE AND VISUALISE COLLECTIVE IMAGINATION?

What we learned when starting to get visual with discussions is how differently people see things which we assume to be self-evident. Counterintuitively visualising ideas helps greatly, because it creates a benchmark where people can say “aha! that’s what you mean!” or “not like this, like that” The visual side also brings many more people into the discussion. You’d be surprised at the number of highly intelligent visual thinkers out there who get alienated from the debate because it is too linguistically contorted.

We try to use humour in our instant visualisations, which are usually snappy Photoshop collages derived from Google image searches. Image searching a concept is inherently humorous.

WITH ALL THE EVENTS AROUND THE WORLD, HOW DO YOU FACILITATE THE PROCESS OF COLLECTIVELY MAKING DECISIONS?

There have always been events unfolding around the world, some of them horrendous, catastrophic or tragic events. With more people about, there are inevitably more catastrophic events happening. I would argue that the proportion of horrible events compared with the total is lower than ever. It is our responsibility to take charge of the media to make sense of all the events happening in the world. It means communicating the progressive, wonderful, and plainly banal events too. Decision making is at its heart an emotional response. Sadly fear is a much stronger and immediate driver of emotional response than more positive emotions. More positive decisions get made in more positive environments.

WHY ARE YOU INTERESTED IN DOING A RESIDENCY IN CANBERRA?

It’s the brain, heart and mind of Australia! It’s a new place for me to discover.

WHAT DO YOU THINK ARE SOME OF THE BIGGEST CHALLENGES CURRENTLY FACING THE ARTS IN EUROPE?

I can’t speak for the whole of Europe but here in London we have really benefited by the flow of personalities and ideas from around the world. New cultural forms are forged when different viewpoints and approaches collide. There is an excitement and buzz in London at the constant revelation of new things. However it is becoming increasingly difficult for artists from around the world to be here, because of the high price of housing, Brexit and the closing down of many small scale experimental spaces. It is this cultural buzz that makes London an attractive place to be, rather than our weather, so it’s something we need to sort out fast.

I am not watching television. I have not watched TV for over a decade and I am much happier without it. If the medium is the message, the message of TV is “This is where it’s at. You are where it’s not.” Occasionally I watch TV at a friend’s house and quite often I use my fascination and anger at its blatant cultural oppression as an inspiration for new formats or devices within The People Speak. For example, our version of The Apprentice would have all the contestants working out how, with their individual capabilities, they can most productively work together. It would end with the Patriarchal Father Figure firing himself!