Award winning  musical comedy duo Sparrow-Folk are Australia’s “sirens of satire.” Fresh out of the oven and on the road to stardom, the pair are bringing sexy back to suburban homes across the country. Celebrating what others wouldn’t dare to reveal in their “over-sharing” style of comedy, the deceivingly sweet pair are jaw-droppingly naughty.

Touted as the DNA-tested love child of the Doug Anthony Allstars and Madonna, Sparrow-Folk broke out on the scene in 2013 when they won the ABC TV’s Exhumed competiton (ACT). They then crashed into global stardom with their viral public breastfeeding anthem Ruin Your Day, reaching 1 million views worldwide.

They have featured on Channel 9’s Today Show, ABC TV, BBC radio, and are regulars on ABC radio. Their debut show, Nested Confessions, at Adelaide Fringe in 2014 attracted multiple 5-star reviews. Sparrow-Folk have since gone on to play sell-out crowds at Melbourne International Comedy Festival, Sydney Comedy Festival, and Perth Fringe. In 2015 they debuted at Edinburgh Fringe Festival with their follow-up hit musical comedy show, SuBIRDia.

Sparrow-Folk have released two albums: The Fox and The Lark (2014) and SuBIRDia (2015)  In 2016, Sparrow-Folk played to sell-out crowds across Australia with their brand new show, SuBIRDia Renovated. In 2017 they returned to the recording studio to work on their third album. 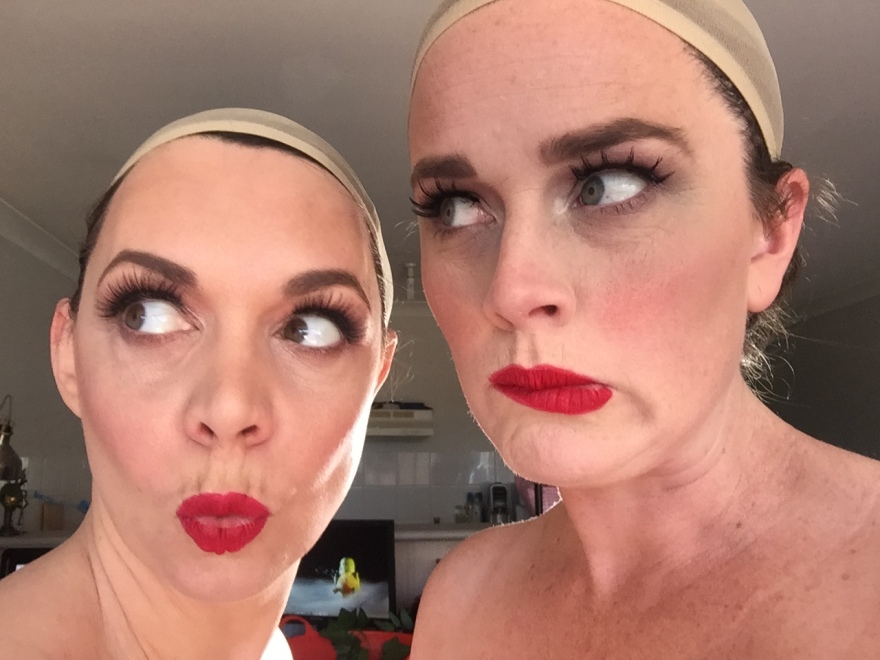 Sparrow-Folk chat before flying in for their holiday show.

WHY MUSIC AND COMEDY?

Music and comedy are perfectly fused when being completely honest on stage. We play out life’s most embarrassing moments by playing them on life’s most annoying instruments. With this winning combination we tell-all about our families without them ever knowing who we are singing about…..unless they are reading this.

We are two birds from the burbs, bravely going where no-one else WANTS to go. We unashamedly delve beneath the skirts of life and we make no excuses to our families for our behaviour. If you want to know our true identities you might find us teaching in ACT schools or working in ACT hospitals.

TELL US ABOUT THE DIFFERENT GENRES YOU DRAW ON TO CREATE YOUR WORK?

We draw on every genre of music to tell our stories and we aren’t afraid to offend music lovers to get our point across. Although we may look like two middle aged mums we will even use rap to beatbox our way into the trickiest songs…..topped off with a bit of shoulder movement and hand DJing and you have your very own Australian rappers from the Burbs.

HOW DO YOU WORK TOGETHER CREATIVELY WHEN SONGWRITING?

Not very well. Our intention, always, is to catch up, share a wine and have a good gossip like most responsible human beings. Unfortunately what really happens is we degenerate into oversharing, slurred singing and smudged mascara like most mums our age. Somehow from this point we create a song.

YOU WERE PROPELLED INTO THE SPOTLIGHT A FEW YEARS AGO WHEN YOUR SATIRICAL MUSIC VIDEO, RUIN YOUR DAY, WENT VIRAL. WHAT WAS THE IMPACT ON YOUR CAREERS?

We became household names overnight! Well in our own households anyway. With this springboard we firmly stepped into the realm of calling ourselves ‘professional’; not just ‘part-time’ or ‘barely.’ Since then we have toured the country, sung with the most wonderful artists and even met Ellen DeGeneres. EDIT: We would LOVE to meet Ellen. Ellen, call us?

SPARROW FOLK IS POPULAR ON THE FESTIVAL CIRCUIT. WHAT IS YOUR EXPERIENCE OF TOURING IN AUSTRALIA?

Long distances and copious amounts of coffee. Australia is beautiful and the audiences are great but we have to admit that there is nothing like being home, with our fellow bogans, in Canberra.

WHAT IS YOUR RELATIONSHIP WITH THE STREET?

We fell in love at first sight. It all started, as most romances do, with eyes catching across a crowded room of other Canberra theatres. We knew we were right for each other there and then when Dean and Caroline laughed at our jokes….ok maybe they just had a coughing fit but that was enough for us.

HOW DO YOU BALANCE CREATIVE WORK WITH FAMILY AND DAY JOBS?

Firstly our juggling skills are very good. Just call us ball-tamers. Secondly, just like lawyers and Doctors we work longer hours than your run of the mill 9-5 job.

Reading and watching don’t fall into the category of juggling.