Mark Swivel is almost certainly one of Australia’s leading artisanal humourists. A bit. His shows aren’t quite stand-up but are always funny. How Deep Is Your Love? – about learning microfinance in the villages of Bangladesh – and Dad. Joke – a riff on the anxiety of parenting – played at The Street to warmly amused houses in 2016 and 2017. For his considerable sins, Mark remains a reluctant lawyer and is in-house counsel for renewable energy retailer Enova Energy. He is also proud Ambassador for Good Return, a Sydney based development NGO.  Mark completed the NIDA Playwright’s Course in 1991 while at law school and has had a number of professional productions of his work including Water Falling Down at Queensland Theatre Company and B Street, Sacramento (2011-12). He is also the MC for leading genuine fake Russian choir Dustyesky who were a hit at WOMADelaide 2018. 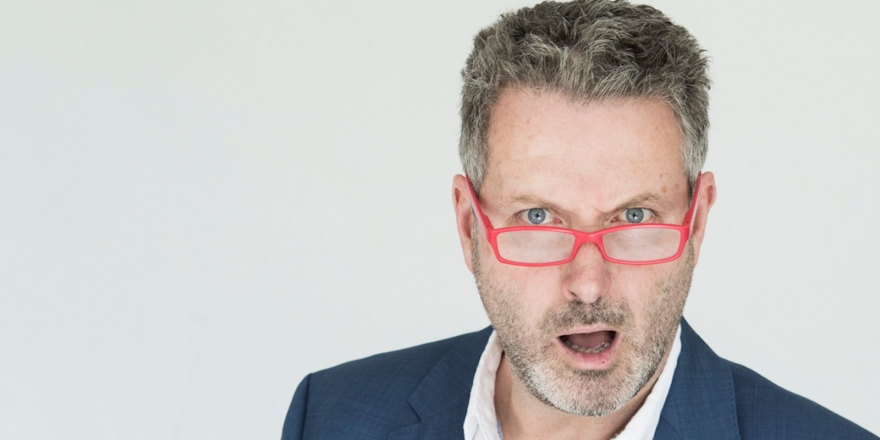 Mark Swivel talks to The Street ahead of his show “Alternative Prime Minister” as part of the 2018 Canberra Comedy Festival.

Genes. My family are storytellers. The women, the men could all hold a room with a tale, always peppered with humour. We grew up watching Dave Allen on the ABC – I love his take on humour – warm and wise, always railing against the stupid, the pompous and the mean.

TELL US A BIT ABOUT YOURSELF AS AN ACCREDITED NEAR DEAD WHITE MALE.

Despite still playing cricket and football I am a little paunchy. Mortality has become shockingly real and personal. So it’s time to entertain, to bring people together, to be mad enough to think we can change and live more wisely, more lovingly. No joke!

YOU DESCRIBE ALTERNATIVE PRIME MINISTER AS A POLITICAL COMEDY AND A SLIGHTLY DRUNK TED TALK. TELL US MORE.

Well, who among us would be PM? You would not wish it on your mortal enemies. Such a thankless task in our broken politics – the iceberg tip of a garbage dump (if you like mixed metaphors). We the people seem to tune out, condemn, and rage … but it’s time to change the game, isn’t it? By the way, TED talks tend to be a little too positive and simple for my liking. Alt PM is fun and silly at times, but if you leave without considering our political culture and your role in it, then I’ve failed … and you don’t have a pulse!

YOU PLAN TO LAUNCH YOUR TEN POINT PLAN FOR “A COUNTRY WORTH LIVIN IN” AT YOUR SHOW. WHAT CAN CANBERRANS LOOK FORWARD TO?

The complete Ten Point Plan remains embargoed. But to give you a taste, its highlights include a Flag Tax, a new Ministry for Cricket and a whole-of-government policy overhaul entitled Responsible Service of Capitalism.

WHERE DO YOUR STORIES COME FROM?

Previous shows grew from personal stories and aesthetically owed a lot to Spalding Gray or Ken Campbell. But Alt PM is a little different, more like the British comic Mark Steel who few know here, or dare I say – how dare I? – John Clarke (I feel unclean saying it but Mr Clarke is a legend and hero.   I would like to think he would have seen something to like in this show).

HOW DO YOU TEST YOUR MATERIAL?

Family meal time is for testing new jokes and lines. The kids are tolerant. Kathryn, my wife, much less so. Haha! For Alt PM we started with a home reading and a fundraiser preview. The premiere was at the Mullum Music Festival, where comedy and theatre always get a run alongside the great music. I am very grateful to its director Glenn Wright for letting me launch my shows at the festival 3 years running.

WHAT DO YOU LOOK FOR FROM AN AUDIENCE?

Connection.  Engagement.  Each audience has its own personality and every person has their own way of responding. I think most comedians, humourists, storytellers put as much effort into listening to the audience as they do delivering their material. Is that as well understood as it might be? Maybe not. The script and the performance are just the start of the work.

HOW DO YOU KNOW WHEN THE AUDIENCE IS NOT WITH YOU?

The defibrillator comes out. Or the doors open abruptly. A sense of panic or a swoosh of air. But seriously the energy in a room changes so palpably it is impossible to miss.

WHAT DO YOU DO WHEN IT’S NOT WORKING?

Move on as swiftly and seamlessly as possible, hoping no one noticed the enormous hole that just opened up where my heart was. It is quite painful to have a room of humans staring at a chasm in your chest, you know.

Athletico Mince by Bob Mortimer and Andy Dawson is my favourite humour. Music from Stella Donnelly, Lucie Thorne and Noura Mint Seymali an amazing woman from Mauritania who sings the desert blues.

I loved reading Lincoln in the Bardo, which is like a mash up of Under Milk Wood, The Third Policeman and Angels in America. I don’t watch much but Laurence Mooney’s Malcolm Turnbull clips are truly excellent.